After Years of Crises It’s Clear: Fur Auctions Are the Only Way to Ensure Fair Prices 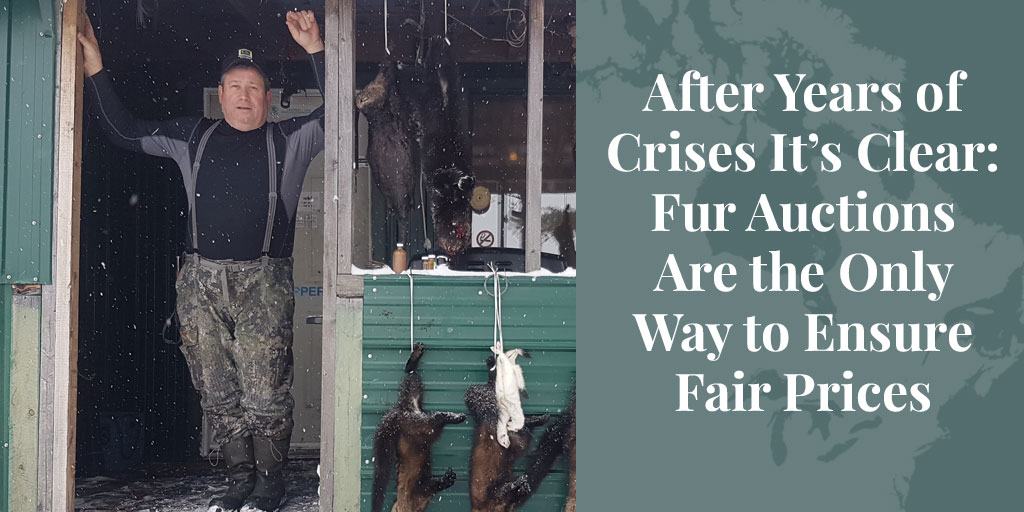 I have been employed in this business from the fur auction end since the early 1980s and as a trapper earlier yet. The first real crisis I personally witnessed in this business happened in the mid-1980s when the Ontario Trappers Association (OTA) went through a major shift in new directors being voted in at the annual trappers convention. Out of that the new board hired Price Waterhouse to develop a new management platform for the OTA fur sales service. When the dust settled, it saw Alex Shieff resign after 20 years at the helm as captain of a real success story, OTA, which he played a major role in building.

A multi-tiered management team was put in place with people being hired with no history in the trade. It was during this time of great unrest and turmoil that the Hudson’s Bay Company (HBC) formed Trappers International Marketing Service (TIMS) and set up a warehouse directly across the road from where Fur Harvesters Auction (FHA) remains today.

TIMS hired away many senior graders, managers and agents from OTA which made our situation even tougher. As well, at the time we were in a depressed market with prices and clearances at unhealthy levels. The end game of the subsidiary company TIMS was to put OTA out of business. As reported in the Ottawa Citizen, Feb. 11, 1986, when TIMS’s newly appointed GM, Ron Lancour, was asked by a reporter, “Why not set up the subsidiary in Toronto and leave North Bay the Association?” he replied, “If you’re going to be in competition, what better place is there to locate than next door?”

Well, that was 35 years ago and TIMS was a flash in the pan and was dead and gone in a few short years. Actually FHA bought most of their warehouse equipment as well, and I recall many of us here rolling carts and bins of equipment down the road from their warehouse to ours prior to TIMS closing down forever. Shortly after this, for the first time since HBC was incorporated in 1670, its name ceased to be associated with wholesale fur trading. While the Toronto location of the auction house remained the same, the name was changed to North American Fur Auctions (NAFA).

In the 1960s there were eight fur auctions in Canada: HBC, Dominion Fur Co., Soudack Fur Auctions, Edmonton Fur Auction Sales, Western Canadian Raw Fur Auction Sales, Canadian Fur Auction, Saskatchewan Fur Marketing Board and the OTA. Some were forced out of business but many were simply swallowed up by the HBC to become a subsidiary or affiliate forwarding agency for that corporation with all furs being auctioned in Toronto.

During the 1980s and up to 2005, Canada was home to three remaining auction houses. In 2005 the late great Ted Pappas, owner of Western Canadian Raw Fur Auction Sales, decided to hand his business over to FHA leaving only two companies standing.

During the past 35 years we have seen markets rise and fall and troubles come and go. As of last year, FHA is the last remaining fur auction company, not only in Canada, but in all of North America.

Why is that, how can it be possible? I leave this to each and every trapper to ponder but the thousands loyal to FHA have their opinion on the matter.

Now here we are today running this great fur auction company during a global pandemic, which we have never before witnessed. All international travel is restricted and most countries remain locked down.

FHA’s business model has been standing since 1947 – to sell fur into the international markets through competitive bidding in our auction room. We are not fur buyers and this wild fur auction house was founded by men decades ago that were tired of the take-it-or-leave-it option. Without an international auction, there will never be a true basis as to what your hard-acquired catch of fur is worth.

This past two years we have witnessed a surge in travelling fur buyers set up to take advantage of our inability to host international buyers at auction. I understand the power and leverage of cash in hand, but I understand more importantly that was all we had for hundreds of years until trappers got fed up and started an auction in North Bay in 1947.

Our next auction is set for mid-April and we are going to have it. There is a chance that only Canadians can attend as our federal government seems intent on keeping us locked down a bit longer. All indications are that many articles are in greater demand now and we are intent on holding to stronger valuations at this auction. Once the final hammer falls, all unsold goods will move onto our online platform where the same valuations will be held to.

We are receiving many calls daily from all over the world asking for coyotes, muskrats, sables, beaver, lynx, bobcats and raccoon. Oil prices in Russia are up and this has Russia back in the game and their cold winter has helped further. The Feb. 8-12 sable auction at Sojuzpushnina in Russia saw prices advance strongly and this reflects most positively for our upcoming sale. China has been extremely successful in the past several months as online garment sales are extremely strong. This has led to many good orders coming in from this important market.

We are much more optimistic going into this year compared to this time last season. This pandemic is nearing its end and when it happens our shippers will be greatly rewarded for their loyalty and commitment to this great company, Fur Harvesters Auction Inc.

Remember, you own the place.

To learn more about donating to Truth About Fur, click here.