Back to the People of the fur trade
Previous
Next 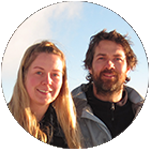 “As trappers, our goal is to maintain stable and healthy wildlife populations.”

Ryan and Minette Kole are active trappers in central British Columbia. Like most trappers, they also have “day jobs”; they both work as registered nurses — Ryan in the Emergency Department and Minette in Intensive Care – and take their vacations in the Fall, so they can be out on the land during trapping season.

TruthAboutFur: How did you become trappers?

Minette Kole: We were both raised in town, so we didn’t grow up trapping. I was raised in North Vancouver, wearing high heels and the whole bit! But Ryan was always interested in the trapper’s lifestyle, so when there was an introductory workshop offered in our region a few years back, we jumped at the opportunity. We haven’t looked back since.

TaF: What does trapping mean to you?

Ryan Kole: Just about everything! Trapping allows us to spend lots of time in the wilderness. We live full-time at our little cabin for 4-6 weeks during trapping season, and we see so much wildlife. When you are trapping, you have to be very observant; you are really close to nature in a very intense way…
Minette Kole: And I really like that we are helping to protect natural habitat. Everyone likes nature, but we are the ones who are out there on the land, monitoring what’s happening, providing information to the biologists, checking the impact of logging and other industrial activity. And you learn so much when you are trapping; our catch is a constant indicator of changes on the land. On our trap-line now, for example, there are lots of wolves, and that’s beginning to impact the deer population.

TaF: What does a trapper do on a typical day?

Ryan: We’re up by 5am to make our breakfast and feed the dogs. If there are some furs to be cleaned from the previous day, we do that. Then we load our gear into the truck and head out by first daylight. Closer to our trap-line, we travel by snowmobile, collecting the animals we’ve caught overnight and setting new traps. If we see deer, we may shoot one for the freezer. By late afternoon, we get back to the cabin and make a fire in the skinning shed to start thawing our catch. We get the woodstove going in the cabin too, to warm the place and make dinner. After supper, we’ll both be skinning and scraping fur pelts and stretching them onto the drying boards. If there’s time, maybe we’ll do some work on the computer, writing articles for our local trapping association until lights out! Above all, it’s the peace we enjoy out here: this is a real trapper’s cabin in the bush, with a woodstove and water from the creek and a generator for the bit of power we need.

Ryan: The fur, of course, is a beautiful product and it helps us make our living, but there are lots of other services trappers provide that most people never think about. Humans live close to wildlife in many parts of this country, and there can be conflicts. Beavers clog streams and flood land; muskrats undermine irrigation dikes and road banks; wolves, bears and coyotes can decimate deer, moose or livestock. Trappers are also the frontline protectors against the spread of serious diseases like rabies in foxes or parasites like roundworm in raccoons; sick animals can pollute drinking water sources with beaver fever…
Minette: Remember too that as governments have less money to monitor logging operations, trappers are the ones who are out there, sounding the alarm when regulations are not respected and encouraging practices that will enhance wildlife habitat. It doesn’t cost the logging company much to leave a barrier of trees along streams, for example, but that prevents erosion and keeps the water cooler – which makes a huge difference for fish and animals that feed on them. And leaving the “slash” — the branches and smaller trees they don’t mill — that provides ground cover for rabbits and mice and squirrels, which in turn supports larger predators. It may seem ironic to animal activists, but we are the voice for wildlife, on the ground. For every day we spend trapping, we probably spend five days writing emails, making phone calls and going to meetings to ensure that forestry practices are as compatible with the needs of wildlife or working on other conservation and habitat-enhancement issues.

Ryan: Absolutely not; trapping today is strictly regulated. We have humane standards and certified traps. Most animals are now captured in quick-kill traps that are virtually instantaneous. The larger predators are taken in modified footholds that cause little or no injuries to the animals.
Minette: Activists are always showing those big old toothed traps, but the traps we use today have smooth, plastic-coated bars that do not even close completely. We’ll sometimes find coyotes that are actually asleep in the trap. Biologists use these same traps to radio-collar or relocate lynx or wolves, so they are obviously not the diabolical devices that some would have us believe.

TaF: Do trappers need any special training before they receive their trapping permits?

Ryan: All trappers now take courses before receiving their permits. And many of us continue taking more specialized courses to improve our skills. Education is really the key to using the new trapping equipment effectively. That’s the message we want to send: trappers today are trained professionals. If you have a problem with your water pipes you call a plumber; if there’s a problem with wiring you call an electrician; and if you have problems with wildlife you should call a trained trapper!

TaF: Isn’t there a danger that trapping will drive some species into extinction?

Ryan: That’s pretty well impossible with today’s strict, government-regulated trapping seasons and other rules. As trappers, our goal is to maintain stable and healthy wildlife populations; we don’t want to deplete our own resource – that would put us out of business! The real threat to wildlife is not regulated hunting or trapping, it is the destruction of the wilderness areas by industrial activity – and trappers are the ones who are out there sounding the alarm and working to protect that natural habitat.
Minette: We are very conscious of maintaining species in our territories. For example: young male marten generally set out first to establish new territories in the fall; so when we are catching lots of males, we know that population levels are high. If there are too many males, they spend their time fighting each other instead of mating. When we start catching females, we stop trapping marten, to give the females a chance to establish their own territories. With management practices like this, combined with habitat protection, we can actually help to increase wildlife populations, which is our goal.

TaF: What do you say to people who claim that “we don’t need trapping, because nature will take care of itself…”

Minette: That’s like saying ‘let’s not control forest fires.’ There are diseases that can be dangerous when wildlife overpopulates. Meanwhile, the people who say this will be the first to call us when a raccoon gets into their attic…and rightfully so, since you can contract roundworm and other parasites from raccoons in your house.
Ryan: The other thing is that we are really part of nature. There is virtually nowhere anymore that humans haven’t impacted, so we have a responsibility to play our part to maintain a balance. Many of us also want to eat healthy, free-range, organic meat – like moose. Well, black bears can wipe out 50% of the moose calves in their first month; same with wolves….and we are their only predators. If we don’t control these populations, nature will do it with disease and starvation – but only after the moose have taken a hit, and it won’t be as humane as our new humane trapping methods.

TaF: If animals are taken in live-holding traps, how are they killed?

Ryan: While most animals – over 90 per cent, in Canada — are now killed virtually instantly in quick-killing traps, the larger predators like wolves, coyotes, lynx and foxes are still usually taken in live-holding traps. They are generally killed with a small-caliber firearm; that’s what our trapping manuals recommend. In BC and some other jurisdictions, licensed trappers can have a permit to carry small-caliber handguns for this purpose, since it is not always practical to snowshoe through the bush with a rifle and all our other equipment.

TaF: Would you encourage young people to take up trapping?

Minette: For sure, we do it all the time! We try to take at least one new person onto our trap-line every fall. We talk about hunting and trapping with the other nurses and doctors at our hospital, and we find people are more and more interested. Many people are now attracted by the idea of harvesting their own “organic” meat and knowing that the animals lived free and wild. The numbers of hunters and trappers are increasing again right across North America for the first time in years.

TaF: Is there anything else you would like to tell us about trapping?

Ryan: If you enjoy getting out into nature and you want to know where your food comes from, you will probably enjoy hunting and trapping! It’s not just for people brought up on farms, and it’s not only for men. Some of our best trappers were raised in the city, and more women and young people are looking to re-establish their connection with the land. You will find that trappers are a very welcoming community; if you are interested, contact your local trappers association and you will surely find someone who is ready to help you get started.