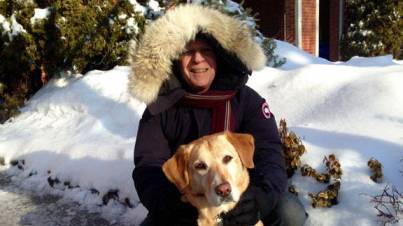 It is minus 23 degrees Celsius (-32C with the wind-chill) but I am snug as a bug in my Canada Goose parka as I walk Maggie, our 9-year-old Labrador Retriever.

It is so cold in Montreal this Valentine’s Day weekend that I cinch my parka hood completely closed, the soft coyote fur ruff forming a cozy, protective ring around my face. The goose down stuffing keeps the rest of me warm. I wonder how our animal activist friends are enjoying the bitterly cold weather, because this is the weekend they have chosen for their National Anti-Fur Day (“Have A Heart, Don’t Wear Fur”) protests in Montreal and other cities across North America.

As a sign of the times, Canada Goose parkas are the target of choice for this year’s anti-fur rituals. Why? Because even though fewer traditional full-fur coats are being worn these days, fur is now omnipresent in smaller items, accessories and trimmings. This has made fur much more affordable, and it is now being worn by more – and younger – people than we have seen in decades. It has been democratized.

In response, PETA has unleashed a new campaign “juxtaposing Canada Goose’s coyote-fur jackets with a disturbing video of a trapped coyote suffering after being shot.” The video is prefaced with a “warning” that it contains upsetting images, but this has apparently not discouraged many of PETA’s fans because, it claims, the video “has received more than 16 million views.”

To drive home PETA’s message, volunteers “wearing nothing but body paint and faux-fur ears and tails” would be posing “in bloody leg-hold traps” outside retailers selling Canada Goose parkas over the weekend. According to PETA Senior Vice President Lisa Lange, “Anyone who buys or sells one of Canada Goose’s fur-and-feather jackets is responsible for these animals’ terrifying and painful deaths.”

So has PETA’s “shocking” video convinced me to give up my Canada Goose? Not a chance, and here’s why:

The first problem is that PETA’s campaign video does not show a coyote “suffering after being shot”. Quite the contrary, we see the animal killed instantly with a direct shot to the head – exactly how it is supposed to be done. This is the most humane way to euthanize animals taken in restraining traps, as taught in trapper training manuals and mandated by the Agreement on International Humane Trapping Standards (AIHTS).

This is also the method proposed by the Canadian Council on Animal Care (CCAC) guidelines.

”3. Physical Methods: These techniques, when properly applied, kill rapidly and cause minimal stress. They may offer a practical solution for field euthanasia of various sized animals and prevent pharmaceuticals from entering the food chain …

… Gunshot: While a shot to the brain of an animal produces a quick and humane death (Longair et al., 1991), it is best attempted when the animal is immobilized by injury or physical restraint.”

In other words, despite PETA’s sensationalist warning – intended to shock people who have never seen an animal killed – its own video confirms that approved and humane methods are being used to euthanize coyotes.

PETA claims that “trapped coyote mothers desperate to get back to their starving pups have been known to attempt to chew off their own limbs to escape.” While this may have happened very occasionally with some species (e.g., muskrats) with older trapping systems, it never happens with modern foot-hold traps.

Furthermore, the whole “starving pups” scenario never happens with fur trapping for one simple reason: like other furbearers, coyotes are hunted for their fur in the fall and winter because that’s when their fur is prime. At this time of year, their young are no longer dependent on them.

As important as the nonsense PETA does say is what it doesn’t say: It omits to inform us that coyotes have expanded their range across North America and are now so abundant that they are the number one predator problem for ranchers, preying on new-born calves and lambs. It also fails to mention the increasingly frequent reports, from Toronto to Los Angeles, of coyotes carrying away pet dogs and cats.

Several states and provinces have even offered bounties to reduce over-populated coyotes.

Culling must be carried out both to protect livestock and pets, and also the health of coyote populations themselves. Given that coyote populations must be managed, it is surely more respectful, and responsible, to use their fur for clothing than to throw it away.

SEE ALSO: Is it ethical to produce, buy or wear fur?

The foot-hold traps used to capture coyotes (as shown in PETA’s video) are not the diabolical, steel-toothed devices that activists love to hate. Their use was banned decades ago in North America.

The new live-holding (“restraining”) traps have rubber-laminated, “off-set” jaws that do not close completely. Springs and swivels on the anchoring chain and other features have also been added to prevent injuries. In fact, these new “soft-catch” traps are commonly used by wildlife biologists to capture wolves, lynx and other furbearers for radio collaring or relocation/release into areas where they were once extirpated. Clearly they could not be used in this way if they injured animals as activists claim.

5. PETA Opposes All Animal Use

Most importantly, PETA’s claims about fur are not credible because PETA is not looking for more humane ways to capture or kill animals we use. PETA opposes any use of animals, even for food or vital medical research.

PETA would have us all wear synthetic materials, most of which are derived from petroleum, a non-renewable resource. This is fundamentally anti-ecological. The modern fur trade, by contrast, is an excellent example of the sustainable use of renewable (and biodegradable) natural resources, a key ecological principle that is now promoted by all serious conservation authorities.

A sixth, “bonus” point is a bit more philosophical. No one is obliged to wear fur (or leather or silk or down), but many of us appreciate the warmth and beauty of high-quality natural materials. The coyote fur and goose down in my Canada Goose coat also remind me that everything we depend upon for our survival still comes, ultimately, from nature. Thus the importance of protecting natural ecosystems for future generations.